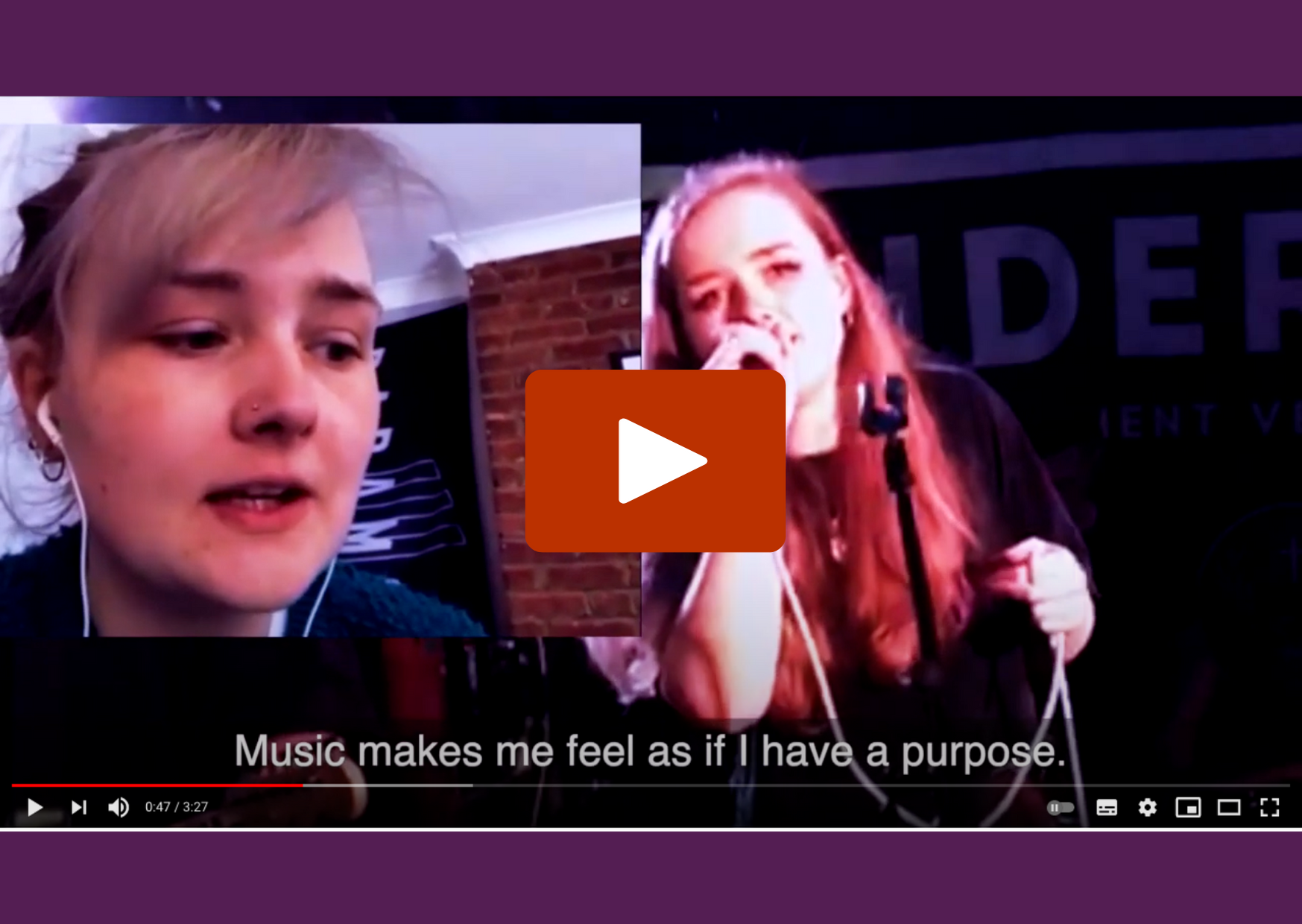 Our youth consultation in 2020 gave us some great insights into young people’s experiences of music making and learning in Wales. But to move the hearts and minds of funders, donors, policy-makers and others, we knew we needed to make their voices heard more directly. Our Youth Forum set to work. They helped us to create our new brand, and filmed themselves to share stories about their experiences of learning and making music in Wales. Youth Forum member Ella Pearson tells us all about the process:

An enthralling first few sessions with the Youth Forum launched us straight into the task of working with videographer Bill Taylor-Beales to create a series of films that portrayed the challenges, barriers faced, and the joys that music brings to our lives. Initially, we were tasked with filming shots of our working environments; being from a wide-ranging expanse of musical branches, it was intriguing to see the worlds in which other young people are making music.

Following an engaging Film School workshop with Bill, during which we were taught the dos and don’ts of producing alluring films, we were fully equipped to be let loose throughout Wales to create our videos. However, the trickier part of this process was creating the audio. We were asked to speak about four subjects: what music means to us, what has helped young people get into music, what barriers they must face within music and what do they need help with.

If you ask a musician why they love music, chances are you will get a response along the lines of “I’m not sure…I just love it”! It is difficult to put into words the intense, fiery passions that musicians have for their craft, meaning it was difficult for us to create audios that would pull at the heartstrings of the audience and rouse them into action. This was all part of the learning process however, as at the next Anthem session, we did some targeted work in breakout groups at unleashing our thoughts and feelings on music and the surrounding topics. The result of this work was inspiring. By doing this, we were able to express ourselves more freely, and many emotion-driven conversations were had.

Once back in the full group, we gave our feedback; the discussion was heartfelt and we felt able to completely open ourselves up to each other, touching upon the deep meaning of music to us (including family roots and acting as a therapy), as well as a poignant and thorough unveiling of the barriers young people are currently facing. It was fascinating to hear from different musicians about their stories. As well as finding many differences in our experiences, we also came across a few common themes, some of which were the sad truths of how music is undervalued.

The fire had truly been ignited – we found ourselves completely caught up in the discussion, constantly bouncing ideas off one another. The feedback session could have lasted hours after our finishing time, but it was safe to say that the tactic had worked: Bill and the Anthem staff had helped us express our feelings about music.

And with that we were left to create our own audios, which Bill has ingeniously compiled in the films that are soon to be released. All that now remained was for Bill to get our opinions on the backing tracks for the films, which were eventually provided by the genius of Joshua Whyte (Blank Face).

The process of creating these videos has been impassioned and deeply personal – it has been incredible to be able to release these thoughts and feelings, and I am so grateful to Anthem and Bill for giving us the platform to express ourselves.

It has also given me invaluable experience of working with the aim of creating an educational but thought-provoking film. I have learnt so much, from how to get the perfect shot, to how to release deep-rooted feelings for music. The entire experience will definitely help me in the future, especially in where to start when confronting the vast array of difficulties that are being faced by young musicians – something that this project has inspired me to continue tackling.